Wow these were AMAZING!!!!


The mods at TWD did say that they would be choosing one easy recipe and one difficult recipe per month from Baking with Julia so I was worried these would be very fiddly. If you look at the length of the recipe you would think so too but they were surprisingly easy.


I made the dough the day before I made the tart. I didn't have any butter in so I used Stork (sorry Dorie!) but it hasn't affected the taste at all. I divided the dough into two before refridgerating it as I knew I would only be making three tarts (the whole recipe makes six). There are only three of us in the house and the rest would go to waste. The dough freezes so I knew I'd use the rest of it at some point.


Rolling the dough and putting it in the tins was the most difficult part, it broke very easily and was a bit of a mismatch job but you really can't tell from the finished product. I do love these tins, I bought them from Lakeland a few years ago and I use them a lot. Dorie's tart recipes always make enough for six of these tarts so easy enough to half the recipe for my family or do all six if we've got guests. Dorie says to remove the bottom from the tins but I baked them with the bottoms in, they were fine and well greased so popped out of the tin easily. 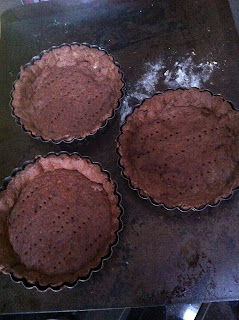 The only change I made (apart from the stork) was to use half milk and half dark chocolate in the filling as my husband and daughter don't like things too bitter. I also forgot to add any biscuits (I didn't have biscotti but was going to use speculoos instead that I had in the cupboard but when the time came totally forgot).


The tarts are absolutely delicious, the truffle filling is a bit like a chocolate mousse. They are very rich and so we could only eat half each (the other half being eaten the next day of course!) I have already made them a second time to use the second half of the dough and I can confirm that it was just as good from the freezer as it was freshly made. 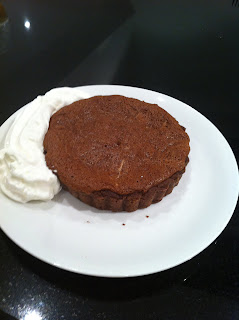 Kate
This is a blog to record my sewing, knitting and baking exploits.